By four months old, I’m sure you thought you’d have your sleep back by now.  I know I did.

Learn how I overcame the sleepless nights, and how you can, too.

Affiliate disclosure: As an Amazon Associate, I may earn a small commission from qualifying purchases from Amazon.com, at no cost to you. 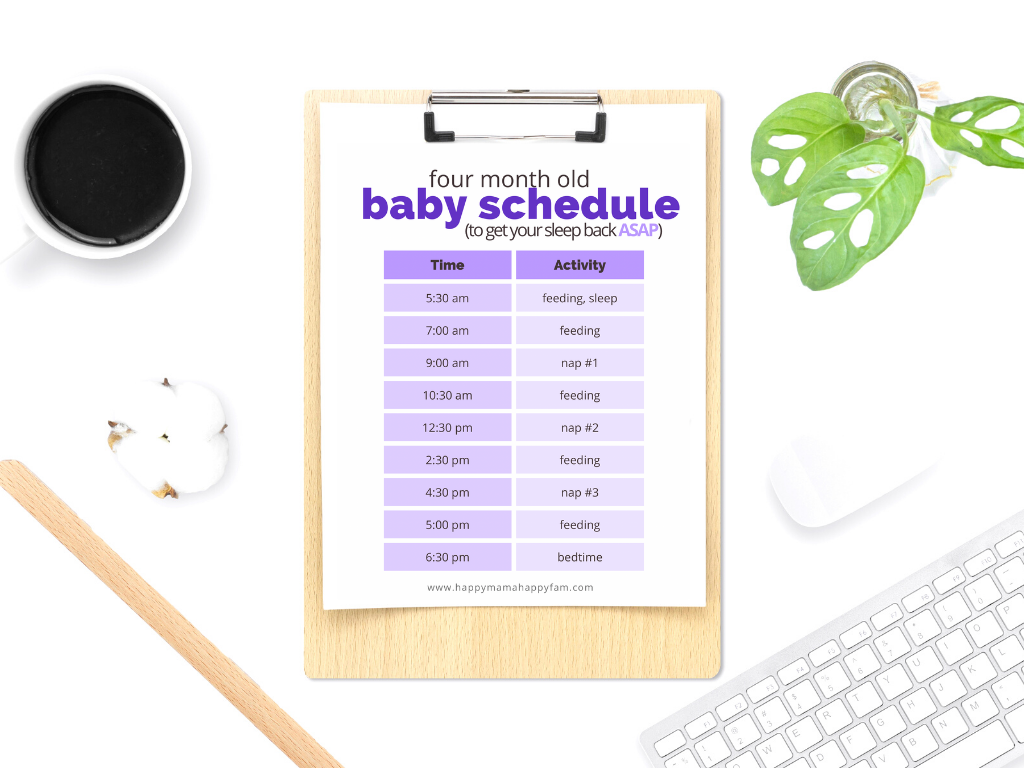 Why I Needed a Four Month Old Schedule: My story

So one morning, as I was caring for my 1.5 year old daughter and four month old son, I started the coffee maker.

It had been another night with really broken up sleep.

I had a lot of success sleep training my daughter.

With my son, I had a much harder time.  This had a lot to do with his room not being ready, when I was ready to transition him out of the bassinet and into his own room.

This was mostly due to a tornado, but that’s a story for another day.

Anyhow, when my son was about three months old, I moved him out of our room.

Because his room wasn’t ready yet, I set up his crib in a spare bedroom.  Now this was not ideal, because we used this spare room like an attic.  It was full of bins and storage.

I was able to safely make a space for the crib.  But there wasn’t room for getting changed, or tummy time, or just hanging out.

So he pretty much felt ditched whenever I brought him to this temporary room just for sleep.

His (my) sleep was an improvement from him being in my room, but it wasn’t great.

He was still getting up two to three times a night for feedings.

I felt defeated because my experience with my daughter had been so much better.

My daughter had been sleeping mostly through the night at about six weeks old.

I knew these sleep problems mostly had to do with our circumstances with the room situation.  But it’s what we had to work with for the next several months.

So back to the coffee.

It had been another night with all the feedings throughout the night.  I was completely exhausted, but I had arranged a playdate.

So I was getting everything ready to head out the door with my tiny people and my travel mug of caffeine.

As the coffee maker started going, my stomach turned.  I felt like I was about to gag.

That feeling was all too familiar.

I had it every time the coffee maker ran for almost the whole year prior.  At that moment, I couldn’t believe it, but I also knew it instantly.  I was pregnant.  Again.

I was in denial at first, mostly because I literally just had a baby.

But as I was processing it, I was just so happy.  I didn’t think I would get to have a third, and I was so thankful.

Within a week or two, the first trimester exhaustion really started kicking in.  It was no joke, and it didn’t care that I was caring for a newborn who wasn’t sleeping well and a toddler.

I knew I had to make some changes quickly with my son’s schedule, if I was to keep my sanity.

I took everything I had learned, read, and experienced when it came to baby sleep over the past two years, and I created a solid plan to get my four month old son to sleep through the night.

My sleep plan was handwritten on the back of some piece of mail that should’ve been thrown out, but it went something like this:

My son’s feedings were a big part of why he was getting up through the night.  The only way I could get him to go back to sleep was to feed him.

At this point, I was feeding him formula bottles.

I had written down to feed him just one ounce on Night 2, but I continued doing this for about five days or so before not needing to do it anymore.

If I had been nursing, I would’ve done a similar method of diminishing the nighttime feedings.

I just would have used time frames for Nights 1 and 2 rather than ounces.  Maybe I would’ve done ten minutes of nursing Night 1, and then five minutes on Night 2.

Again, the goal was really to have all the feedings done during the day.  These first few nights were just to wean the nighttime feedings away.

Listening to him cry was definitely the hardest part of it all.  It really is like instant mom-anxiety.

But I had started some bad habits, along with the bedroom situation, and I was determined to push through so my son could learn to sleep.

He deserved to learn to sleep peacefully.

The first night was the hardest, but the subsequent nights were drastically better.

In less than a week, the nights had greatly improved.  There was the occasional hiccup, but for the most part, we were out of the woods.

From that point until he was about 13 months old, he would consistently wake up between 5am and 6am.

I would change his diaper and give him a bottle (all while keeping him in the crib and in the dark).

He would then continue to sleep for about another hour and half or so.

Doing this at nine months pregnant…or three days postpartum…wasn’t the most ideal thing.  However, the trade off was worth it.

I was always able to get a little more sleep afterwards.  And he (almost) always slept through the night, aside from this early morning wake up.

So all of this to say, with a firm, consistent plan, I was able to teach my four month old baby to sleep through the night.

It took some dedication, and some tears, but it did work.

My son was finally able to get the sleep he deserved.  And I got the rest that I needed.

Develop a plan. Write it down.

If you are struggling with your baby’s sleep, please know that you don’t need to!  Do research on baby sleep.

TakingCaraBabies.com is a great place to start.  Talk to mom friends.  Think about your own experiences: what worked and what didn’t work?

You can use the customizable schedules in my download to write down a plan that works for you and your baby.

Be consistent and stick to it.

You may surprise yourself with your success!

A note about feedings

For the longest time, with both my first two babies, I would always feed them before putting them to bed, rather than feeding after waking.

Well, it’s usually recommended to do it the other way: feed upon waking.

I started doing this, and I think it does make a difference in improving sleep.

I feed after waking with my youngest.  If he’s overtired and having a hard time falling asleep, I will periodically lean on feeding to put to bed as a crutch, but this is pretty rare.

A note about bedtime

The bedtime routine with all three of my cluster babies is pajamas, three books, three songs, prayers, hugs, tuck in.

Up until my youngest was about four months old, I would just do a diaper change, swaddle, and lay him in the bassinet or crib.

Around when he turned four months old, he started crying when I set him down in the crib. This was problematic for a couple of days, until I figured it out: he was becoming older and more aware of everything.

To fix the crying, I just began applying the bedtime routine I use with my older kids.  I turn on the sound machine and would just do one book and song rather than three of each.

Then, I stand up, close the blinds, and rock him in my arms for just a minute, before setting him in the crib.  I don’t want him totally asleep when I lay him down.

If this happens, he always wakes up crying.  Rather, I want him drowsy when I set him down, so he can fall asleep independently in the crib.

Changing his routine as he turned four months old really helped him to continue to sleep well!

Having the right tools for the job is clearly essential.

These baby sleep must-haves have been so helpful in sleep training each of my babies.

We lovingly refer to this swaddle as an “angel suit.” Babies literally look like an angel in it, and it’s the easiest thing to use!

I also love using these swaddles, as well!

The glow-in-the-dark binks are a must!  I’ve stuck with these with my two boys, and they’ve been great!

I’m obsessed with our sound machine. We have one in each of the three kids’ rooms.

You can read a full review of my love for this product here.

I also love our baby monitors. Which are actually advertised as indoor security cameras. This is why they are priced so low!

I go into detail about these excellent baby monitors here.

Lastly, blackout shades are a must. I didn’t always think so, but now I’m a convert!

You can read all about how I implement and use each of these products over here.

I used wake windows to determine the subsequent nap times, rather than strict times.

The wake windows I used for my four month old were usually about two hours long.  If I was nearing the two hour mark and he was still awake, I would put him down for a nap or bedtime.

To help you out, download my FREE editable Four Month Old Baby Schedule, so you and your baby can finally get some rest!

If you are feeling drained from not sleeping, there really is hope!  You can use my 4 month old schedule or develop your own!

Find what works for you, and stick with it!  You will sleep again!

Design Your Newborn Baby Sleep Plan: How to get your sleep back

How to Help Your 3 Year Old Nap: 5 Tried and True Strategies